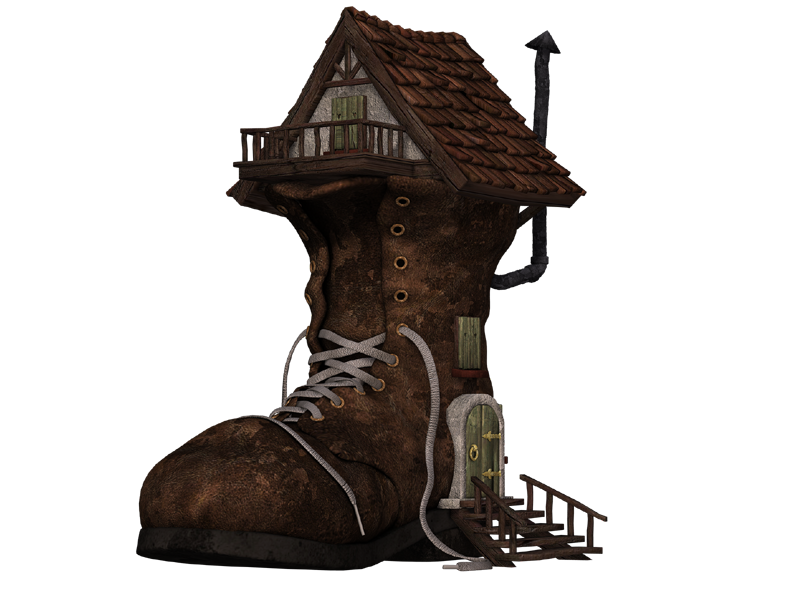 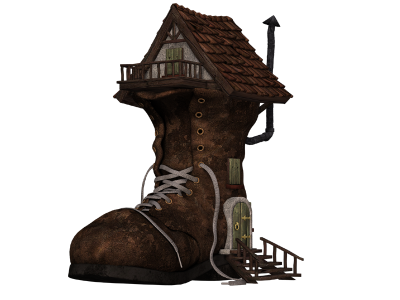 I did not set out to fracture my foot. I am almost certain that virtually no one ever does. However, people end up with foot fractures of varying sorts and for various reasons. Sometimes they misstep, sometimes they fall, some dancers land wrong and sometimes people drop things on their foot.

In looking for data regarding how many people in America end up with foot fractures, all I could easily come up with was a study reviewing foot and ankle injuries reported in major trauma hospitals between 2007 and 2011. Around 280,933 people were unfortunate enough to injure their foot or ankle, or roughly 70,000 per year. Not all that much in a country where there are 6.8 million fractures of various types each year. And of those 70,000 or so, even fewer still injure the forward part of the foot. So, I can only commiserate with less than 1% of the broken bone injured people this year. Sort of makes me feel a little lonely.

Yet, this is not something that I would care to burden anyone with, even though, as broken bones go, this is not a hard one to tolerate. At least not so far.

A foot has quite a lot of bones in it. In fact, the foot and ankle have 26 bones which form 33 joints that are controlled by more than 100 muscles, tendons and ligaments. We only have 206 bones total in our adult bodies, so 25% of our bones are in our two feet. Given the general tendency of our feet getting banged into things one might think there would be more fractures. In actuality, I am pretty sure there are many more than those that get taken to major trauma centers. I would bet that plenty of people have broken a toe or two and have never even gone to a doctor about it.

Many people in fact walk around on fractured feet because the pain, although bothersome, does not totally incapacitate them. Plenty of people, who do things like run, have something called a stress fracture. A stress fracture is a small crack in a bone that is often brought on by repetitive stress. These small cracks are painful, but given time and rest they will often recover without intervention. Yet, if you are a person who has given yourself a stress fracture, you are probably a person who is not really into ‘resting’.

So if a stress fracture is a small crack in a bone, what is the difference between it an other fractures. In fact, what is a fracture actually? Why does it hurt? Aren’t bones just calcium?

The Physical Characteristics of Bones 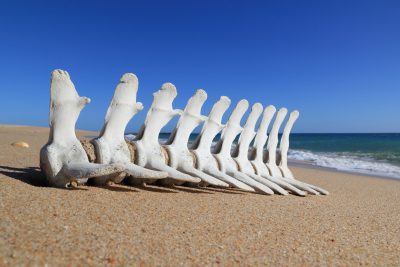 Bones are very interesting to me, and not just because I have a damaged one now. Bones are fascinating because they are living tissue that is never at rest. As much as it seems our bones are these internal stick-like things inside our bodies, bones in fact are metabolically very active. They are constantly remodeling themselves based on the forces we place on them. Remodeling means we replace old worn and damaged bone with new bone cells. Adults remodel their skeletons at about 10% a year, which means that within 10 years we have totally replaced our entire skeleton with new bone cells.

Why we don’t notice this is because remodeling occurs cell by cell constantly. Right now as you are reading this, your body has replaced some bone cells. Some areas of our body replace bone faster than others. For example, the end of our femur bone (leg bone) where it becomes the knee. This area is under so much weight from walking that it is replaced about every 6 months (many people upon hearing this ask me why this does not solve knee issues. The answer is that most knee issues are not about the bones of our body, but rather involve the cartilage that lines our bony joints.)

Another thing that is fascinating about bones is that our bone building is influenced by the stress we place on the bone (Wolff’s law). In the example of the bottom of the femur bone, stress causes the bone to be replaced more frequently, but stress also causes the body to thicken a bone. The more we stress our bones, the greater the density (calcification) of our bones. This is why we are told to do plenty of weight bearing activity in order to ward off osteoporosis (loss of bone calcium).

It’s Not All Calcium

Our bone has four layers. The outermost layer of our bone is called the periostium and we can think of it as the skin of the bone. It provides the blood supply to the bone which controls bone healing, growth and health. In children this layer is very thick (because the bone is growing bigger and longer) and it thins out when we become adults and reach our skeletal maturity.

Cortical Bone is the hard shell of our bone. This hard and thick layer protects the body parts beneath it (think skull and brain) and it also lets us move our body from the strong action of our muscles.

Cancellous Bone is inside the cortical bone and consists of a spongy matrix. Some of our bones have more cancellous bone than others.

The Skin of Our Bones

Back to that periostium layer. Not only does it contain the blood supply to our bones, it also has more nerve endings than any other part of our body. Which is why it hurts so darn much when we break a bone. A broken bone cuts the skin of the bone and – OUCH – but also, the blood supply is damaged and bruising occurs.

How to Know if a Bone is Broken

You might think it would be obvious if you break a foot bone. After all, there is the trauma which should be a pretty big clue. But we suffer all types of trauma that does not break our bones. In fact it is just as likely we might create a sprain/strain type injury to an ankle or foot muscle or ligament instead of breaking a bone. Sprains and strains cause pain and bruising. They make it hard to walk on an injured foot. How is a broken bone different? Does breaking a foot bone mean you cannot walk on the foot?

Interestingly, you actually can walk on a broken foot, which I did the week before I got my foot examined by a medical professional. Mind you I had to walk on the inner edge of my foot or the heel, but it was not very painful. What about bruising and swelling? Yes, there was both, but not a lot of either. Maybe that is because within the first few minutes of my injury I was able to Rest, Ice, Compress and Elevate my foot – something I continued to do every couple of hours for the first few days.

So, if I was doing all this R.I.C.E. ing, and could walk on my foot, why did I get my foot examined? Two things. The bruise that was the most unusual was the bottom of my foot. It was parallel to the edge of my foot and was about an inch long. The rest of my foot bruise (not very much) moved toward my heel. The underfoot bruise did not alter its position and seemed to increase ever so slightly as days passed.

The second thing I noticed is that I could move my toes and ankle very well, but if I touched a certain part of my outer foot edge – ouch. If I put any pressure on the outside of my foot while walking – ouch. And as the days passed my foot was not feeling much better and in fact seemed maybe a tiny bit worse.

There was also a third thing. I began to be obsessed with the thought that my foot was fractured. I had dreams. Nothing so direct as a clear calm voice saying “your foot bone is broken” but my kind of subconscious stuff that involved dreaming about my cats biting my foot. I have not looked that up in any dream interpretation encyclopedia, but it became clear to me that my subconscious was not going to leave me alone until I got verification of the foot problem.

So I went and got an x-ray. Before I went I drew what I am calling my psychic x-ray of what I felt certain was going to be where my fracture (aka dream cat bite) was going to be found. 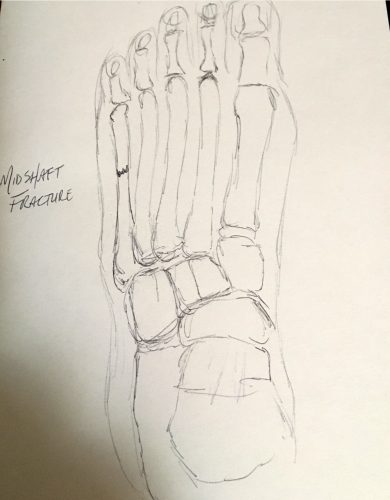 I pretty much nailed the where, but I did not anticipate the oblique spiraling nature of it. Officially called a mid shaft 5th metatarsal oblique fracture with minimal displacement and it is definitely a broken foot. I am to keep all weight off of it for 2 weeks, which means crutches, and also wear a lovely functional and attractive walking boot for an additional 6 weeks or so.

Next post I will talk about my fascinating journey of recovery – also known as ‘How I continued to work my full yoga and exercise teaching schedule while hopping around on one foot’. I also will share with you the interesting world of 5th metatarsal treatment options and my own fun little experiments. After all, if you can’t have fun with a fracture, then you are just not trying.

This is part 1 of a series of articles I have written in my adventure of living with a broken foot. If you would like to explore more on this topic, please check out my other articles: 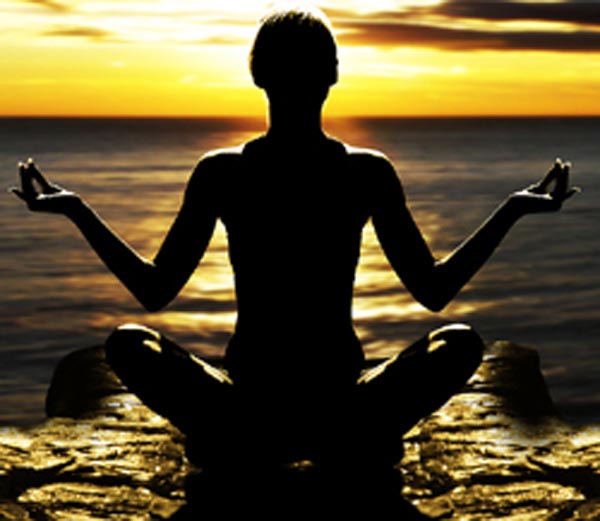 Ask the Yogi: How often should I do yoga?