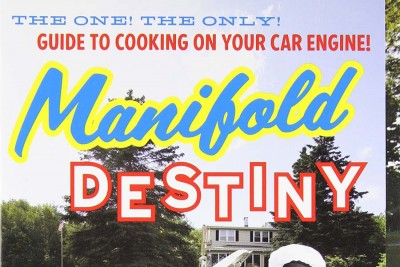 Having recently returned from a two week trip I feel I have become somewhat of an expert on the potential delights of road food. Here I am not talking about burger joints or even great restaurants in all the various cities we passed through. What I am talking about is the food we were able to create for ourselves while driving.

Now, truth be told, the food planning and creation was not done by me but by my best friend Kelly. We have been friends for over 30 years and during that time we have hit on a winning combination. She creates incredibly fantastic meals and I do the dishes and sometimes chop up some vegetables. I am one lucky person, that is for sure.

We did something unusual for our car trip. Knowing that we would be driving for long distances we decided to make sure we had great food. We also decided that it would be better for our budget if we could avoid eating at restaurants as much as possible. Thus we decided that the best thing for our trip would be to cook on the road. As in cook on the car engine.

Some of you may have heard about cooking on a car engine but most have probably never done such a thing. I had not either before this trip but luckily my best friend and traveling companion was not only an inventive chef in her own right, but an experienced car engine cook.

First of all, let me dispel a few of the common questions I have received when telling folks about our culinary adventure. 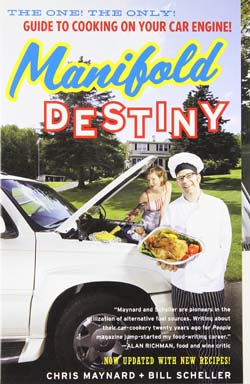 Okay, so that out of the way, let me tell you that if you would like to pursue this interesting way of cooking your food while driving and you don’t have time to make a best friend who is not only an inventive chef but also an experienced car engine cook, then you need to acquire this great book called ‘Manifold Destiny’ by Chris Maynard and Bill Scheller. Originally written over 20 years ago, the updated version will explain all you need to do to turn your car into you very own mobile oven.

We were not even out of Texas before we had our first engine roasted meal. Lamb chops! My good friend Kelly had done her prep work and had our food ready to go. She first seasoned and seared a rack of lamb at home in the broiler for color. That is one thing that really makes this work. Do all your chopping and seasoning, etc. at home and you will just have to plop the ready to go food item on the engine. It is also important to know the engine will work like a roaster oven. You will be able to cook things but nothing is going to brown, so if you want that seared look you will need to do your prep work.

About a half hour before we wanted to eat, we pulled over and put the lamb in foil along with roasted garlic and red onions. We drove to our predetermined stop at the Quana, Texas rest stop and set up at one of the covered picnic tables. We opened the car hood and Kelly pulled the foil packet off the engine. This caught the eye of a couple passing by.

That is another thing about this kind of cooking. People are going to notice. The man was very enthusiastic and we invited them to the ‘unveiling’ of the lamb. The woman was somewhat taken aback and worried that the food was somehow contaminated. She pointed to one of the roasted onions and queried “What is THAT thing?!” Kelly promptly ate the onion in front of her saying, “That thing is a red onion.” I am pretty sure if that woman was taken aback by a red onion she is not going to be cooking on a car engine in spite of the fact her man was all excited about it.

The lamb was served over a bed of lettuce with carrot, celery, cucumbers, roasted beets, feta cheese, green olives and sun dried tomatoes. It was served with a roasted onion vinaigrette. It was also served with about a 20 mile an hour hot as heck wind that made our outdoor picnic an effort in strategic paper plate holding. Nonetheless it was a heavenly feast for our first engine food. Yum. I did the dishes, aka threw everything into the trash cans. 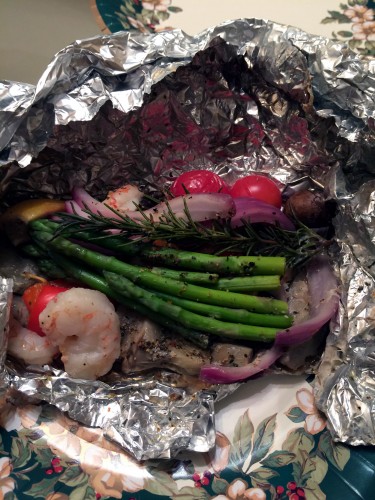 Stickless shrimp kabobs: This started with frozen shrimp which were paired with a branch of rosemary, cherry tomatoes, frozen artichoke quarters, red onions, mushrooms, lemon slices and red bell pepper. The seasoning was roasted garlic cloves, lemon pepper and salt. Kelly did this prep work prior to our leaving home and had the kabobs still frozen in our cooler so they were thawed and ready to cook when we were ready for them.

For this meal we pulled over about 45 minutes prior to dinner time, which would take place at our first stop for the night in Albuquerque, New Mexico. Kelly used a disposable aluminum cake pan and then placed the foil wrapped kabobs in the pan. This cut down on the chances of hot juices exiting the kabobs and onto tender hands. After we pulled into the parking lot, checked into our hotel room and unpacked the car from all our luggage it was time to open the car engine and bring in the cooking. By the way, a flashlight is very necessary to make sure you can find your way safely around the hot car engine in the dark.

This meal was incredibly delicious as well. It also enticed us with a heavenly smell from in its aluminum pouch as we brought it through the hotel lobby and up to our room. We were well prepared with sturdy disposable bowls for this meal as well as utensils. Much better than room service. That was a great way to end what turned out to be a 13 hour driving day.

As much as we enjoyed these meals, there are some limitations to car engine cooking. First of all, not all cars are going to have an ideal space to place your foil food packs. You don’t just need a place in the engine, but you need a hot place. Lucky for us the Nissan Rogue we drove on this trip had a great open space right on the engine that was just the right size. Also, the more insulated your car engine, the less heat there will be for cooking. Most of the time you are doing good to get about 250 degrees of heat from the engine. That is certainly hot enough to burn your hand, but it has to be factored in to cooking times.

When you are cooking on the car engine, it is like cooking in a roasting oven. You can get water to boil at 212 degrees, so you will have steam. This is great for some recipes but you will not get any browning. You might also get uneven cooking if you try to cook too big of a meal.

You don’t want to begin with a cold engine and to be safe you must always shut off your engine prior to loading your food packs as well as unloading. Some things you will need are lots of aluminum foil, disposable foil baking pans and hot pads. Most cook times will take at least 45 minutes to an hour so this is not a short drive kind of thing.

With the right prep work, car engine cooking can be a very simple way to create a better than drive through food choice while on a road trip. You could also easily pre-cook your meals and use the car engine as a way to heat up it up.

Probably the best choice we made on our trip was to bring along the Coleman PowerChill Cooler. This is an iceless cooler that plugs into your cigarette lighter and keeps things about 40 degrees cooler than the surrounding temperature. You can also purchase an adapter that lets you plug it into a standard electrical outlet. What this cooler allowed was for us to have the convenience of a refrigerator right there in the car with us. It was only a 40 quart capacity but that was plenty for keeping our tea cold, plenty of room for yogurt and other snacks as well as all the food prep we had for the car cooking. Because this cooler could also be taken into the motel at night we always had a fridge handy even if the motel did not come equipped.

I can’t say enough good things about this cooler. With it we had greater choices than just foods that could handle room temperature. With it we were not having to replenish ice or worse yet, deal with melted ice. We also had another meal compliments of this cooler. 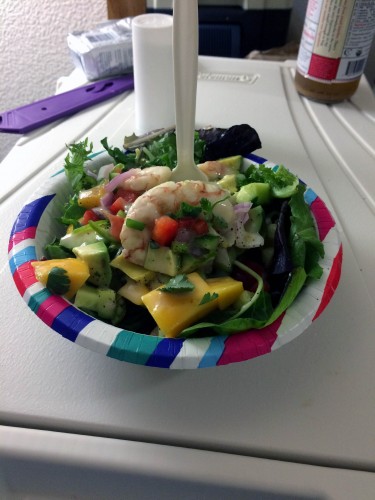 This starts with raw frozen shrimp placed in lime juice and orange juice along with onion and poblano peppers. This mixture is allowed to ‘cook’ in the cooler for about 24 hours. This was put on a bed of mixed lettuces, avocado, cucumber, mango, cherry tomatoes, cilantro and red bell peppers and served with an apple vinaigrette.

Of course these were not the only meals we had on our trip. There was a wonderful egg dish with peppers and cheese made in the hotel microwave (30 seconds at a time and keep stirring the eggs). We had another car engine meal using pre-cooked chicken thighs we purchased from a small town grocery store and heated up on the engine. There were even times when we just made do with a protein drink I mixed up from our stash of protein powder, yogurt and maple flavoring. Although we did eat at some fantastic restaurants too, most of our meals were car sourced. We ate healthy, we saved money and we made lots of great memories as well. It just doesn’t get much better than that.
Bon Appetit everyone.

Sleeping – Your sleep position and your body comfort

Effect of Meditation on our Brain: Top Six

Neuroplasticity – How our brain changes itself

One thought on “Road Food”